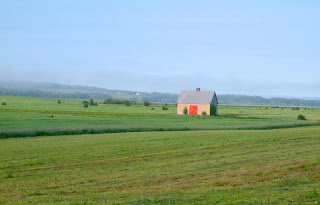 Anyone living in upper Bay of Fundy is quite aware that large tracts of our coastal land are currently protected from tidal inundation by dykes. The original dykes were built by Acadian settlers over 350 years ago to convert salt water marshes to farm land.

Although these converted salt water marshes or "dykelands" remain some of the region's most fertile agricultural land, much of it today is underutilized: 15% of dykeland in Nova Scotia and 41% of dykeland in New Brunswick is no longer being farmed.

It's estimated that 85% of the saltmarshes in the Bay of Fundy were lost due to dyking. With the pressures of climate change and rising sea levels, there certainly appears to be case to be made returning some of these unused dykelands to the Bay as salt marshes.

Ducks Unlimited launched an interesting project this week in upper Bay of Fundy: it intentionally returned 16 hectares of farmland to saltmarsh and will closely monitor how the restored saltmarsh can act as a buffer to rising sea levels and storm surges. It's also expected that salt marshes may ease the pressure on remaining dykes. 'Twill be interesting to watch...

Email ThisBlogThis!Share to TwitterShare to FacebookShare to Pinterest
Labels: Environment