Get the pictures and subscribe at: http://fundytides.blogspot.com
Image Credit: wikipedia.com 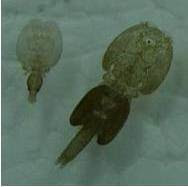 On Sept. 23, Environment Canada issued "inspectors directions" telling Northern Harvest and Ocean Legacy Inc. to cease using cypermethrin, and prevent its use in the future, in floating salmon cages in the Bay of Fundy off Charlotte County.

The department based these orders on results of samples taken in the spring that show cypermethrin was present in salmon cages belonging to the two companies, said Robert Robichaud in Moncton, operations manager for the department's enforcement branch in New Brunswick and Prince Edward Island.

The test results showed "detectable" levels of this chemical licenced for agricultural use, but not for a marine environment in Canada, Robichaud said.

The department took the samples from May through July as part of a program of routine inspections of aquaculture sites that began this spring, Robichaud said.

The investigation continues into who put the cypermethrin, commonly used to kill potato bugs and on blueberries, in the water.

The probe could lead to criminal charges.

On Nov. 19 the Grand Manan Fishermen's Association reported dead lobster in traps. More were found Nov. 23 in Pocologan, and off Deer Island Dec. 3.

On Sept. 8 this year, a fisherman reported a number of dead lobsters off Campobello Island. The laboratory has yet to identify any chemicals on these lobsters.

Canada does not licence cypermethrin for use in water, but the substance does kill sea lice, a bane to salmon farmers.

The industry should raise fish in tanks on land, John Werring with the David Suzuki Foundation said from Vancover.

"This is just all part of an ongoing investigation," said Pamela Parker, executive director of the New Brunswick Salmon Growers' Association. "We shouldn't draw conclusions until the investigation reaches its end point."

"Northern Harvest Sea Farms has not, is not and will not use cypermethrin. The use of this, or any other unauthorized products is strictly against the company and owner's policy," Ingalls said in his written statement.

The company will co-operate with Environment Canada's investigation, he said.

"Ongoing tests at these sites have resulted in negative readings. All other farms tested had negative results, including recent testing at three farms in Campobello.

"Because of the seriousness of this issue, Northern Harvest immediately contracted an independent laboratory analysis of the sites in question among others. All those results have been negative," he said.

Northern Harvest will say no more while the investigation continues, he said.