Groundbreaking Tidal Power Technology to be Tested in Cobscook Bay

A Portland-based tidal power company unveiled its latest underwater turbine structure today in Bangor. It's the largest ocean energy device to be deployed in U.S. waters, and it will be submerged in Cobscook Bay early next month. 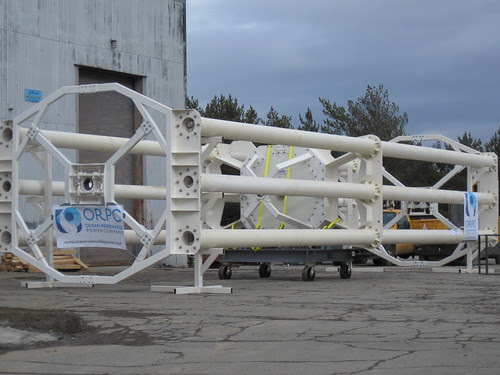 Eastport continues to be the hub for some of the most advanced tidal power research in the country, according to the Portland-based Ocean Renewable Power Company and the University of Maine.

"Cobscook Bay and Western Passage, which are on either side of Eastport, are the best tidal energy resources on the east coast of the U.S., so that's why we're there," says Christopher Sauer, CEO of Ocean Renewable Power Company, which is developing tidal power projects in Maine, Alaska and Florida.

Sauer contracted Stillwater Metalworks of Bangor and Harbor Technologies of Brunswick to build its latest turbine, nicknamed Energy Tide 2 (pictured above). "It's going to be at the end of deployment arms that are at the side of a barge and it's going to be lowered in underneath the barge and it will be about 25 feet below the surface," he says. "And the barge is going to be moored in Cobscook Bay, just off from an area called Shackford Head. So actually, interesting, as you drive into Eastport, at one point as you're coming into town you'll actually be able to look over and see it."

The device is made up of a rectangular framed box containing a 10,000-pound generator and turbine blades. It looks like a giant push-reel lawnmower - 46-feet wide by 11-feet tall, and 14-and-a-half feet deep. "It's the largest Ocean Energy Device ever deployed in U.S. waters," Sauer says. "It's rated, designed for a maximum capacity of 60 kilowatts, so that's the largest yet done in the United States. Now in Europe and other places they have done bigger, but in the U.S. this is the biggest."
on February 20, 2010