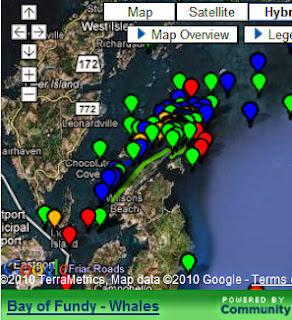 Since right whale habitat studies have concentrated only in the open Bay of Fundy — not near Head Harbour Passage or in Grand Manan Channel — research is unlikely to reveal actual right whale activity in the unstudied areas, including the 40 right whales that frequented near the entrance to Head Harbour Passage last summer (2009). Such research and results are commonly referred to by the scientific community as "garbage in, garbage out"; the results are a reflection of the quality of the research.

As marine biologist Art MacKay, who has been mapping whale sighting data in the Quoddy area, stated last summer, Head Harbour Passage was "plugged with whales." (See Art's whale-sightings map at the top-left of his I Love Quoddy Wild website. Or go directly to a larger version of his Fundy Whales map on CommunityWalk.)

February 25, 2010
CALAIS — A biological assessment filed by Calais LNG with the Federal Energy Regulatory Commission (FERC) has concluded that increased vessel traffic from this proposed project is not likely to adversely affect North Atlantic right whales.

The lengthy report – a biological assessment on threatened and endangered marine mammals and sea turtles – was prepared for the company by Normandeau Associates Inc of Bedford, New Hampshire and submitted to FERC this week.

It concludes that liquid natural gas transport vessels using the terminal will avoid travel through the areas most heavily utilized by right whales but also notes that low visibility, such as fog and night transit, in addition to the whales’ surface behaviour, limits the ability to see these whales.

The report says Calais LNG has sought the most effective mitigation measures to reduce the risk of collisions with whales.

Based on the relatively low percentage increase in vessel traffic (3.1 per cent) that the Calais LNG project will contribute to the entire Bay of Fundy area, combined with the mitigation measures and a ship speed of 10 knots, the authors of the report assert that “the increased traffic from this project may affect, but is not likely to adversely affect the North Atlantic right whales.

The report also states that the overlap in frequency and source levels of vessel noise with right whale calls, vessel noise and presence of vessels may affect but are not likely to adversely affect the right whales. Similar reasons are listed in the report as
to why it is felt the project will also not adversely affect humpback, fin, sei, blue and sperm whales. Due to the relatively low prevalence of loggerhead and leatherback sea turtles within the transit route, the report notes that the vessels are also unlikely to adversely affect them either.

Calais LNG proposes to build an LNG receiving, storage and vaporization terminal and related natural gas send-out pipeline at a site near Ford Point on the St. Croix River in Calais.

The project will allow for berthing and off-loading LNG vessels, storage of three 160,000-cubic-metre LNG tanks and delivery of natural gas to the send-out pipeline connecting the terminal with the interstate pipeline of Maritimes and Northeast Pipeline for transportation to markets in New England.

The terminal site will be located within the Calais city limits on a site approximately six miles (9.5 km) southeast of the city’s population centre and approximately 20.7 miles (33 km) from the pipeline.

The site area is approximately 337 acres which include intertidal land with about 2,800 feet of frontage on the St. Croix River and adjacent submerged lands.

The terminal will be developed on a portion of about 35 acres that lie between US Route 1 and the St. Croix River. It will include berthing and unloading marine facilities and will receive one to two LNG vessels a week.

Initial construction will include two tanks and timing of construction of the third tank will be based on considerations such as expanded market requirements and inventory management in support of supply reliability.
on February 27, 2010

Email ThisBlogThis!Share to TwitterShare to FacebookShare to Pinterest
Labels: Whales