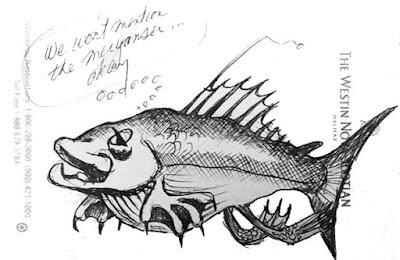 A genetically modified Atlantic salmon escapes from a fish farm into a river.

But it doesn’t live long enough to enjoy its freedom. Because the salmon isn’t eating a particular feed, a "kill gene" kicks in and it dies.

It may sound like science fiction but researchers are well on their way to this kind of genetic tweaking, said Fred Whoriskey, of the Atlantic Salmon Federation, in an interview Wednesday.

Genome mapping and research will eventually open up a wide array of biological tools. Most of them
are much less ominous than creating a genetic smart bomb that ensures escaped farmed salmon don’t survive to degrade the wild salmon population.

For example, fish farmers will be able to manipulate brood stocks for faster and more uniform growth, said Mr. Whoriskey, vice-president of research and environment for the salmon federation.

"That will help the Canadian aquacultural industry become far more competitive than it was before," he said from the federation’s headquarters in St. Andrews, N.B.

Genetic information will also be invaluable for conserving the dwindling wild Atlantic salmon population, Mr. Whoriskey said. The database will allow researchers to determine exactly where a particular salmon came from, right down to the river where it was spawned.

"The management implications of that are quite enormous," he said.

Much work already has been done on mapping the genome of several fish species. But an organization in British Columbia hopes to land the Atlantic salmon’s entire genome by 2011.

Genome British Columbia has teamed up with government and research organizations in Chile and Norway for the project.

The co-operative will spend $6 million for the first phase of the research, which is expected to be completed by early 2011.

The information will be released into the public domain soon after that, said Pierre Meulin, chief scientific officer of Genome B.C., in an interview from Vancouver.

The human genome project was completed in 2003, so you might think the Atlantic salmon’s genome would be an easy catch. Not so, Mr. Meulin said.

"It’s very complex and very large, the size of the human genome," he said.

As well, the information will provide a reference point for the genomes of other " ;salmoni d" species, which include Pacific salmon, rainbow trout and smelt, Mr. Meulin said.

Canada exported salmoni d products worth about US$800 million in 2007. It’s an even more lucrative export for Chile and Norway, which is why government and private sector organizations in those countries came aboard for the genome project.

The contract for the first phase of the project was awarded to a genomics firm in Massachusetts after an international call for proposals.

The second phase, expected to be completed by late 2011, is yet to be tendered.

The genetic modification potential of the work isn’t a part of the project, Mr. Meulin said. He emphasized the same benefits noted by Mr. Whoriskey.

"We hope the sequencing will allow both the managers of wild and aquacultural industries to really understand what’s going on and better manage salmon stocks," Mr. Meulin said.