LNG proponents, particularly those who stand to gain financially, continue to twist the truth to further their drive to see LNG terminals in the Quoddy Region and counter Canada's position that Head Harbour Passage is internal Canadian waters and LNG tankers are not welcome.

Downeast LNG's recent FERC environmental impact assessment is filled with errors and omissions that suggest that a less than professional group was responsible for its production. At the very least the consultants were unfamiliar with the area.

Here's a few of the current problems:

1. Dean Girdis of DELNG continues to state the right of the United States to evoke "innocent passage" through Head Harbour Passage under the UN "Law of the Sea". This paper tiger continues to be quoted in spite of the fact that the United States has not signed this UN convention and has NO RIGHTS under UNCLOS! Further, if they had signed on, there are rights and obligations that continue to be held by the individual countries. It ain't as simple as Dean seems to think. More particularly, he now states that his proposal rests in the same sovereignty arena as the Arctic, Great Lakes, and Straight of Juan de Fuca!

2. The United States Coast Guard assessed Head Harbour Passage for FERC and reported everything is fine for LNG tankers in direct conflict with the position of the Canadian government. These are Canadian waters. But, in case you didn't know, they come and go through our waters at will and have been reported to overhaul vessels in out Passamaquoddy Bay waters. I am told that this is by agreement. What gives here? Huh? why does Canada not have its coast guard at its border?

3The deadline for responses is early July. this gives very little time to craft complete and professional responses to the document. Save Passamaquoddy Bay has petitioned FERC for an extension since this is the busy season for everyone who works around the Bay in fisheries, aquaculture, education, real estate, and tourism. The two pilots from Eastport have submitted a letter to FERC refuting the busy season. Basically they say that nothing is happening in spite of the active Canadian lobster fishery, the building of weirs, the arrival of thousands of smolts, the launching of whale watching, the preparations of restaurants, B&Bs, Inns and more. To read their statement, it sounds like nothing happens here, so we should all be able to almost instantly bend our time to meet the LNG promoters' schedule.

3. The FERC EIA states: Section 4, Page 261-- "There is no indication that the LNG project would affect any lobster catch results in Canada, as there is little if any lobstering along the LNG vessel route in the waters of Head Harbour Passage." That's a big surprise to everyone who is setting traps along Head Harbour Passage and other deep water locations that they will share with the proposed LNG tanker route. The fishing organizations better get their act together FAST!

The photos below were taken by me at about 4:00 PM on June 2, 2009 (today) on the north shore of Campobello Island (Head Harbour Passage) about a mile west of the East Quoddy Light Station. This is directly along the proposed LNG transit route. Lobster buoys are located all along this shore and lobstering occurs on an almost daily basis. Brian Flynn 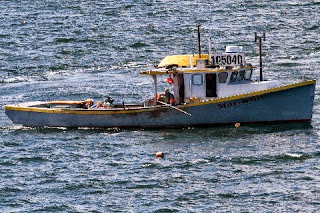 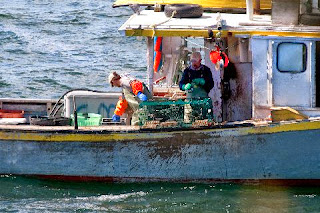 4. There's more, but I've got to go work on some whale data! Apparently there are no whales of note in Head Harbour Passage. Huh? This is the most important area in the Gulf of Maine for Finback whales, Harbour Porpoise, and Minkes. Everyone who knows anything about the Bay of Fundy knows this. How could it be missed? Well, Joyce Morrell is heading up a group to get that information together, in spite of the fact that it is well documented. Apparently, it was missed by the professionals who did the EIS. They did get some species listed that hardly ever occur here. Wonder where they got that information? Anyway, the whale watching fraternity better get their act together too!
on June 11, 2009