Gulf Oil Spill Unlikely to Directly Impact the Bay of Fundy ...BUT ...

If it wasn't so sad, it would be laughable. New Brunswick's Minister of Fisheries, Rick Doucet is rushing off to The Gulf of Mexico to add his inestimable talent to that disaster and is, according to the local papers, taking the lead on a "summit" that the Gulf of Maine Council has had underway for a long time now anyway ... sounds like a pre-election move and photo-op to me.

Unfortunately, the forces that are currently at work are huge and way beyond the talents of our farcical politicians and their driven by "profit" friends and, perhaps, beyond the scope of common sense and our collective ability to stop the insane destruction of our tiny blue planet..

So let's take it one point at a time. 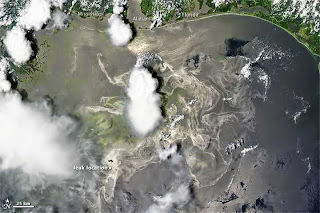 NASA satellite photo.
Ocean oil drilling is going on around the world and is being opened up more and more in the offshore, Arctic and other sensitive areas. Driven by our greed, we are destabilizing our world at an alarming rate and setting in play forces that we do not totally understand ... all in the name of "profit" and under the excuse of feeding our "essential" energy needs. The Gulf oil spill is only one example of our continuing rape of our precious finite Eden as we rapidly turn it into a potential Hell.

Did you know that there have been over 50, 000 bore holes and wells poked into the ocean bottom in the Gulf of Mexico? And there has been ongoing leakage through the years? 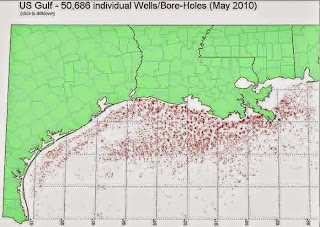 But the current accident is truly enormous and spectacular with experts estimating losses of 35,000 to 60,000 barrels per day ... at the upper limit, that’s 2.5 million gallons of oil per day (Politico.com)

So, it's well established that massive quantities of oil are entering the marine system. But is this oil likely to flow north to the Bay of Fundy?

Gulf Oil and the Bay of Fundy
Circulation in the North Atlantic is dominated by the Gulf Stream, a surface current that brings warm waters of the Caribbean northeastward to bathe the coast of Europe. Because of this, Western Europe is much warmer than other parts of the world at the same latitude. 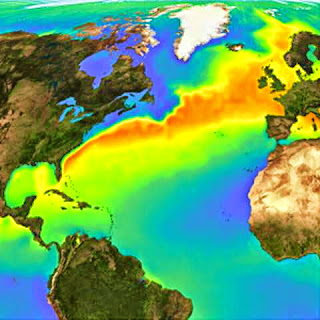 University of Maryland
Atlantic circulation is driven by cold saline arctic waters. These spill off the floor of the shallow Arctic Ocean into the basin of the deep Atlantic, sinking rapidly and creating "suction" at the surface.

When they do this, warm surface waters from farther south rush northward to fill the space left by the cold arctic waters. By this means, the warm tropical Gulf Stream is pulled north (University of Maryland).


Although the Gulf Stream moves back and forth somewhat as it flows to Europe and it does influence the climate at the southern tip of Nova Scotia, it does not flow into the Bay of Fundy and, as DFO scientists have recently indicated, there should be little concern about the spill itself flowing to the Bay or onto coastal Nova Scotia in the immediate future. But as the components disperse within the ocean itself, we may well see local evidence of this disaster.


However, in the immediate future, our natural wealth here in the Bay of Fundy depends on the marine life that migrates back and forth each spring and fall. And that wealth will soon be moving south directly into the path of the the Gulf of Mexico oil spill. The consequences of this may be catastrophic for those organisms and our future. 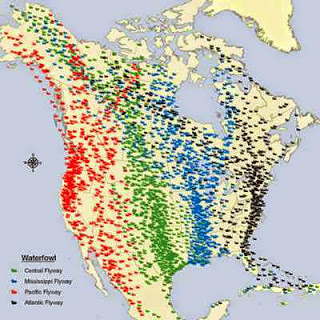 Can We Save our Marine Assets
In response to the Gulf of Mexico oil disaster, President Obama, the most powerful individual in the world, placed a moratorium on offshore drilling ... a sensible move by any responsible standards. At the very least, it would provide some time to attempt to ensure that safeguards are in place and that these regulations and laws are being adhered to. But, industry does not agree because when the oil stops flowing, their insane profits stop as well.

So along comes federal judge Martin Feldman in New Orleans who blocked Obama’s six-month moratorium on new deep-water offshore oil drilling and mocked the decision to impose it as sloppy and illogical. But now it is revealed that Judge Feldman held stock in Transocean LTD, the owner of the Deepwater Horizon rig.(www.politico.com)

So can Minister Rick Doucet do anything worthwhile? I've spent a lifetime trying to point out how we have been destroying our important "eco-economy" here in the Bay of Fundy, an economy that is historically and currently still based on an abundance of natural assets. During this 50 odd years, not one, I repeat, not one Minister of Fisheries for the Province of New Brunswick has ever attacked any of the root problems that have been degrading our environment in the Bay of Fundy since the 1960's.

Perhaps Minister Doucet should consider staying at home to work on the problems we have here now. Smarter men than he are on the scene in the Gulf of Mexico.

Actually, now that I've written this, I think prayer is now in order.

My opinion this morning. Art

Some question financial reality of tidal power in NS 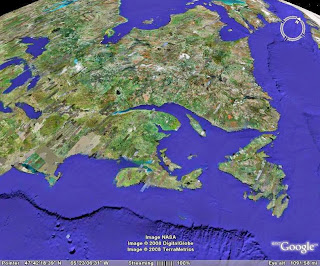 Get the pictures and subscribe at: http://fundytides.blogspot.com
Don’t miss boat on tidal energy


The United Kingdom and Canada are the world leaders in exploring the potential of harnessing the energy from the flow of tidal currents.

The U.K. is very excited by what they have learned from the three tidal turbine demonstration projects they have installed to date. As a result, they plan to install a tidal energy capacity of one gigawatt by 2020 — enough to supply the energy needs of approximately 300,000 homes. The U.K. is keen to take advantage of its impressive tidal regimes, decrease its carbon footprint, and reduce its dependence on non-renewable energy imports.

Scotland has been particularly aggressive. It is showing the way by granting six developers under-sea real estate permits in exchange for promises to build a tidal generation capacity of 600 megawatts (180,000 homes) by 2020 in the Pentland Firth area. The U.K.’s one-gigawatt target looks quite achievable when its interim plans to install tidal farms in Wales and the Channel Islands are added to the Scottish initiative.

Canada has had a great start, having installed demonstration turbines at Race Rock in B.C. and in waters off Nova Scotia in the Bay of Fundy. As yet, however, there are no Canadian plans to commercialize tidal energy generation. Canada’s Ocean Renewable Energy Group (OREG) claims that, given our progress, we could reasonably expect to build a capacity of around 600 megawatts by 2020. Much of that capacity could be in Nova Scotian waters.

Nova Scotia’s recently announced Renewable Energy Plan has recognized this potential. The plan calls for a task force "to develop strategies for commercializing marine renewable energy." It has also authorized "feed-in-tariffs (incentives) for developmental tidal arrays that reflects the cost of the turbines and their deployment."

And it will develop marine renewable energy legislation so that licensing procedures are defined and environmental protection and resource conservation are in place. This kind of support will encourage the financial community to invest in Nova Scotia tidal energy projects.

Still, we must act quickly to further define the true extent of our tidal energy opportunity, set tidal energy targets, and finalize the specifics of the permitting procedures and feed-in tariffs. Otherwise, other jurisdictions will step in and we will miss the window of opportunity that is open to us.

Timely action will permit Nova Scotia, like Scotland, to build on its current leadership position. If we take this action, we can look forward to the day when a significant ocean energy industry becomes a reality in Nova Scotia. It is a vision that is within our grasp.

Frank wrote:
I would like to see tidal energy become a reality, as much as anyone, but these guys are going to have to get their act to-gether, here they are talking about "feed-in tariffs" meaning this is high cost power, meaning either power rates or taxes go up, economic development is stifled and people lose jobs. How aout these guys going back to the drawing board and get competitive, then we will have another look at the option.

BruceMcC wrote:
To Frank: I appreciate your concern about rising electricity rates, but the reality is that during the period of feed-in tariffs tidal energy will only represent a small fraction of the 2300MB capacity that NS power currently has. Let's say that by 2020, we have 23MB of tidal power, that would represent only 1% of the total. Let's say the initial feed-in tariff for tidal is $0.25/kWh - or let's say $0.25612/kilowatt, as that is $0.14 more than my residential rate of $0.11612. More than double - but it represents only 1% of the total, and so rates go up only by $0.0014 to $0.111752, or an extra $0.14 on a $100 bi-monthly invoice. By the time tidal energy represents a significant fraction of the installed capacity, two things will have happened (1) The costs of setting up tidal energy will have declined, so the feed-in tariffs will be decreased* and (2) the price of other forms of energy will have increased. *that is why they are called "feed-in". They are a subsidy, of limited duration. One last comment - our tax dollars are routinely used to provide significant subsidies to oil and gas companies. We just don't see this drain on our pocket book quite so easily.
on June 04, 2010 No comments: Links to this post

COUNTDOWN - 3 DAYS TO THE FUTURE