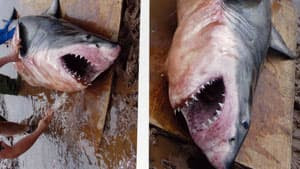 This great white shark was caught in a fishing weir near Economy, N.S. submitted

The three-metre, 272-kilogram shark was caught in a fishing weir by fisherman Wayne Linkletter, near Economy, N.S.

Steve Campana, head of the Canadian Shark Research Laboratory, said the shark was likely looking for fish when it got trapped.

"They're interested in fish and perhaps small seals and dolphins. It's very unusual for a great white to attack a person and usually when they do, it's because they look up and see a surfer on a surfboard and it resembles a seal, which is one of their favourite prey," said Campana.

Campana added that great white sharks are often more threatened by humans, rather than the other way around.

"Canada is within the range of great white habitat, so they've undoubtedly been coming up here since time immemorial," he said. "It's just that the population of great whites used to be much larger, at least 10 times larger, just 30 years ago than it is now."

Campana said the sharks are sometimes seen around Sable Island.

"The great whites will go up there and have a buffet meal of tasty young seal," he said.

The shark was caught alive but later died.

The head was sent to Halifax's Museum of Natural History for further study.

Get the pictures and subscribe at: http://fundytides.blogspot.com
on August 17, 2011