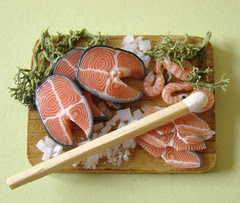 PORTLAND, Maine—Maine salmon farmers had their most abundant harvest in a decade in 2010, marking the continued rebound of the state's finfish aquaculture industry.

More than 24.5 million pounds of salmon valued at $76.8 million were harvested from pens in ocean waters off eastern Maine, making it the second most-valuable seafood in the state behind lobster, according to the Department of Marine Resources. It was the highest output since 2001 and is nearly triple the harvest of four years ago, when Maine's salmon farming industry was reeling.

The industry has slowly rebounded the past few years and is positioned for moderate growth in the future, said Sebastian Belle, executive director of the Maine Aquaculture Association. Government forecasts are calling for an increased demand of 1.1 billion pounds of seafood a year in the U.S. alone by 2020, he said.

"We are convinced that Maine is very well-positioned to increase domestic production and supply the market," Belle said. "The underlying economic and demand fundamentals are very, very strong for the sector."

The Maine salmon aquaculture industry began 20 years ago with promises of fast growth. By 2000, the harvest had grown to 36 million pounds valued at nearly $79 million. Salmon farms and processing plants employed hundreds of people in eastern Maine.

But a series of setbacks -- tougher regulations, a disease outbreak, environmental challenges and changing economics -- contributed to the industry's downfall and an "investor confidence crisis," Belle said. By 2007, the harvest had plunged to under 9 million pounds.

All the active salmon farms in Maine are now owned by Cooke Aquaculture, of Black's Harbor, New Brunswick, which grows salmon in pens in Cobscook Bay, off Machias and near Mount Desert Island in eastern Maine.

"Things have certainly changed since ... we first purchased (the farms in Maine) and production was at an all-time low," Halse said.

The harvest has rebounded to levels last seen during the industry's heyday from 1995-2001. The value of last year's harvest was the second-highest on record behind only 2000. The harvest sold for $3.83 a pound on average, the highest per-pound price on record.

The industry has adapted to demands by changing from European to North American strains of salmon and cutting down sharply on the number of escapes from the salmon pens, said Patrick Keliher, acting deputy commissioner of the Department of Marine Resources.

"Last year's strong harvest is an indicator that the industry as a whole has continued to make strides in Maine," Keliher said.

Maine and Washington are the only states where salmon is farmed, but their output is dwarfed by that of major salmon producers such as Chile, Norway, Canada and Scotland.

© Copyright 2011 Associated Press. All rights reserved. This material may not be published, broadcast, rewritten, or redistributed.