Unless you are blessed with god-like prescience, this is truly something to be worried about. Additionally, this industry has a long history of poor judgement on salmon diseases, vaccination potential, stocking density and more. GMO "accidents" will go beyond remediation. Perhaps efforts should go to increasing profits by decreasing mortalities?
My opinion this morning. Art 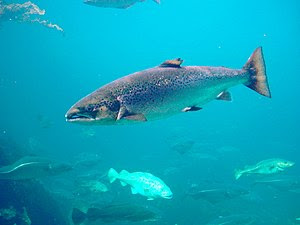 The U.S.-based biotechnology company has an egg-hatching facility in Bay Fortune where it's developing advanced-hybrid salmon designed to grow faster than traditional fish. The company touts its AquAdvantage Salmon as reaching market size twice as fast as traditional salmon.

AquaBounty is currently awaiting a decision from the U.S. Food and Drug Administration on whether its fish can be sold in the American market. If approved, the fast-growing salmon would be the first genetically modified food animal for sale in the world.

The coalition of opponents to the company's plans met with Ghiz and provincial Environment Minister Richard Brown Thursday. The group, which includes the Council of Canadians, P.E.I. Health Coalition, the Canadian Biotechnology Action Network and Earth Action PEI, has been asking Ghiz to address what it says is growing opposition to AquaBounty's development of GMO salmon in P.E.I.

Leo Broderick, vice-chair of the Council of Canadians, said the group wants public consultations on the AquaBounty export plan.

"We did get a commitment from the premier that he would play a more active, positive role in trying to get Environment Canada to be more transparent," said Broderick. "And so, he is going to write Environment Canada asking whether or not Aqua Bounty has requested approval for commercial production of GMO Atlantic salmon, salmon eggs on P.E.I. And he's going to ask that the P.E.I. government be part of the environmental risk study. That's very good."

Broderick said the Premier agreed to take the group's demands for a consultation process to the Liberal Caucus, but he ultimately refused a request to declare P.E.I. a GMO-free province.

The truth is what we choose to believe. Are escaped Atlantic salmon really a threat to the wild salmon in Fundy?

Well,  here is another business tragedy being turned into a gloom and doom story as the Atlantic Salmon Federation and others keep beating the drum that mixing stocks will damage the wild runs of salmon. I've been in the business since the inception of salmon farming in Fundy. In fact, the very first experimental farm was located at my facility in Deer Island and I started the first commercial operations there and at Eastport. Before that I carried out research along the coast of Fundy for over 20 years and what I saw suggests they are missing (or worse ignoring) the real causes.
In the beginning,  ASF was all for aquaculture as a way to "save" the Atlantic salmon on the east coast. In fact they provided the very first smolts that went into the experimental cages at Deer Island. The concern then was they were "inferior" fighters on a rod and reel and they didn't "taste right". The first myth was dispelled when Wilf Carter was invited to angle in one of our cages. The myth of a "poor fighter" went down the drain that day. As for the flavour, we did some "blind" tests using Newfoundland salmon. I'll leave it to you to guess the results. Like the current situation, the truth is what we choose to believe.
I have yet to see convincing evidence that interbreeding between aquaculture and "wild" fish produces any detrimental results. I have read the report which is the foundation of this belief and, frankly, it is more opinion than science. One wonders if the researchers are pushing this current position because it produces research monies.
Back in the sixties and seventies it was clear cutting in the inner Bay of Fundy that was destroying salmon spawning areas, industrial pollution,  budworm spray and agricultural chemicals that were the concern. This was followed by increasing pollution from shoreside domestic treatment facilities as well as major new types of concern such as elevated salinity from the brine line serving the potash mines in Sussex.
Now the aquaculture business is not "without sin". But it is not the source of all the woes of those that push half truths on behalf of the salmon anglers. They would be well advised to count the loss of salmon by aquaculture sites as a blessing for the angler. Perhaps some "hybrid vigour" is just what these long-since mixed-breed, so-called, "wild" salmon need?
My thoughts this morning
Art
************************
Thousands of farmed salmon escape from cages Published Tuesday January 11th, 2011
Derwin Gowan
Telegraph-Journal

These escapees threaten wild Atlantic salmon with parasites and disease and by mixing genes with the native fish, Atlantic Salmon Federation (ASF) president Bill Taylor said in an interview.

The wind prevented Admiral Fish Farms Ltd. from recapturing any of the escaped fish, company president Glen Brown said in a written statement.

However these fish, each less than 200 grams (seven ounces), would not likely survive in the wild, he said in the statement.

Taylor did not seem so sure that all of these 25-centimetre salmon, between the smolt state and adult stage, would die before causing trouble for the wild fish.

"When they do become sexually mature next fall, they will by instinct begin to search out rivers and run up rivers to spawn, and when they do that they will be spawning with wild salmon," Taylor said. "The progeny of hybrid aquaculture-wild salmon, they're survival is greatly reduced."

"The breach occurred on two new cages located south of Pumpkin Island, Grand Manan, when a vertical rope and chain came in contact with nets for an extended period of time during high winds," Admiral Fish Farms said in its statement.

Workers first noticed the breach Dec. 26 but high winds prevented them from confirming the loss till Dec. 30, the company stated.

To prevent future breaches the company does not intend to put fish back into this type of cage until design issues are resolved, according to the statement.

"Fish containment is a top priority with our company and we take any breaches very seriously," Brown said in the statement.

The company reported the escape as required by provincial regulation, Taylor acknowledged.

However, the ASF would move salmon farms to "closed containment" on land to prevent escapes as well as spread of sea lice and disease between the aquacultured and wild fish.
Read more »
on January 11, 2011 No comments: Links to this post

By BARB RAYNER
barb@stcroixcourier.ca
CALAIS – Three LNG opponents have asked the Federal Energy Regulatory Commission (FERC) to dismiss Calais LNG’s application.
Earlier this month, Calais LNG withdrew its permit applications with the Maine Board of Environmental Protection (BEP) but said it fully intends to re-file them Dec. 17. Arthur Gelber of Calais LNG requested a further delay by FERC in deciding whether to continue processing the company’s application.
In a letter to FERC, Ronald A. Shems, a lawyer for the Three Nation Alliance - made up of Save Passamaquoddy Bay (SPB) in both Canada and the US as well as Nulankeyutomonen Nkihtahkomikumon (We Take Care of Our Land) - said that in Calais LNG failed to inform FERC the company had withdrawn all its applications for necessary state permits three days before it filed its application with the federal agency.
“Failure to pursue state permits (an incomplete application) means that critical information will be absent from public review during the NEPA (National Environmental Policy Act) process as well as potentially from the commission’s public interest determination. The commission will not be able to take a hard look at, much less base a decision on, relevant factors.”
Shems goes on to point out that Calais LNG withdrew the applications because it lost title, right or interest (TRI) in the land on which the proposed import terminal would be built and added that this has not been re-established.
Likewise, he said, the company lost and has not since re-established financial capacity to pursue the project. Both TRI and financial capacity are required by the State of Maine for necessary state permits. Shems said the company also failed to comply with outstanding technical requests from the state at the same time.
In the state proceedings from July to December, he said the company requested five delays, repeatedly representing to the BEP that it was close to finding a financial resource to replace GS Power Holdings (a Goldman Sachs subsidiary).
“Each representation was (an illusion). The last effort in this regard was to announce that GS Power Holdings’ interest had been sold to two employees of CLNG, both of whom lack financial resources.”
Shems said this project has lacked financing for six months and essential property interest for three. For these reasons, he said, the Three Nation Alliance requests that FERC dismiss Calais LNG’s applications from FERC dockets since taxpayers’ funds should not be expended on a project without basis.
Ronald Rosenfeld, MD, has also written to FERC saying that Calais LNG’s request should be denied as “it seems inappropriate for the commission staff as well as for the public to continue to devote time and resources to this project.”
To claim there are “new” managing members and that this is a reason for delay, obscures the fact the “new” managing members have been involved with the project since its onset, he stated.
“At present, Calais LNG does not have property on which to build the project and does not have the financial capacity to move forward. There seems little reason for the FERC process to continue.”
Calais LNG agents did not respond to interview requests.

Bill Clarke/Tribune
Winds and high tide caused waves to roll high at Inch Arran Park in Dalhousie earlier this month.
Wood and debris was thrown into the park. Some seaside roads were closed in the area after the storm.
Published Wednesday December 29th, 2010
Changing climate | Areas along ocean a concern
A1
By CHRIS MORRIS
The Daily Gleaner http://dailygleaner.canadaeast.com/front/article/1365866

Weather experts say New Brunswick is already experiencing the punishing realities of climate change, particularly rising sea levels and damaging storm surges.
Recent storms have caused more than $50 million in damage and untold grief for home and cottage owners, but coastal expert Robert Capozi warned that floods and surges are a fact of life under the new "coastal realities" dictated by the earth's changing climate.

"What's happening in New Brunswick is there is a sea level rise that is occurring," said Capozi, coastal and marine planner for the provincial Department of Environment.

"It is not a phenomenon that's going to occur in the future. It is happening right now. There are significant projections that even since 2006 have become reality,'' he said.

Capozi said the problem of a rising sea level is compounded by the impact of more severe and more frequent storms and a sinking coast line.

"The coast of New Brunswick is subsiding - it is sinking into the water," he said.

"Compounded with the rising sea levels, that's why I think the severity of the impact of onshore winds during a storm surge is even greater today."
Read more »
on January 01, 2011 No comments: Links to this post