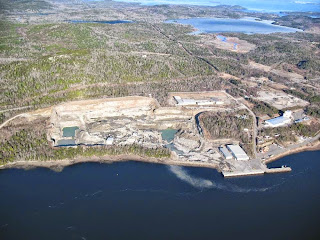 Here are few more questions that beg answers in addition to those in Art MacKay's list of Quarry Questions. (Courier article, Feb. 17). This is also in response to Jamer's assurance that their project "will have no impact on the water quality of Chamcook Lake"

If the local people allow their Rural Plan to be changed so that foreign aggregate companies like Vulcan Materials can devastate their landscape with mega quarries, Jamer Materials, the quarry operator, will still have to move the watershed boundary which runs over the top of the hill they plan to mine in order to prevent flow from it into the Chamcook Lake watershed. This may not be a problem for Vulcan Materials who are used to (re)moving mountains, but what if berms to redirect this flow fail, as has happened with other Vulcan quarries, or blasting opens a rift in the bedrock, as apparently happened (April, 2007) with Jamer's operation at the Port of Bayside? Vulcan has had problems at other quarries, (Google: Vulcan Quarry Violations), e.g.

There is obviously at least some risk that something will go wrong with berms or blasting. To deny this seems either naive or dishonest. Is any risk to St Andrews' water supply acceptable? Is it the right thing to do, even if it is legal and one “expert” says it’s safe?

If the berms do hold over the next century or more and no rifts are opened toward Chamcook Lake by the blasting, runoff will be contained on the "other" side of the watershed boundary as planned. This means it will flow into the St Croix estuary, or am I missing something? This is not a black and white question of who’s expert is right. It is a black and black question. In other words, it is a lose-lose situation for the environment.