Is it time for another "comfort" statement from Greg Thompson and Ottawa.

He told Reuters that he hoped the new strategy would help resolve regional disputes -- such as with Canada over rights to the Northwest Passage that could become a short-cut shipping route between the Pacific and Atlantic Oceans if ice melts.

"We want to find win-win approaches that benefit everybody," Steinberg, making his first visit to Europe since taking office, said on the sidelines of a two-day meeting of the eight-nation Arctic Council in the Norwegian Arctic town of Tromsoe.

He said Washington viewed global warming, which is strongly affecting the Arctic, as one of the "quintessential problems of our times" that can only be solved by international cooperation.

Washington would seek to work with Russia and other states in the Arctic Council -- Canada, Finland, Sweden, Norway, Denmark and Iceland, he said.

"It's largely a question of protecting the environment, providing opportunities for indigenous people, benefiting all of us economically -- if it can be done consistently with our environmental values," he said.

The thaw is disrupting the livelihoods of indigenous peoples and threatening wildlife such as polar bears. It may open the region to more oil and gas exploration, mining or shipping.

"Too often the problem we have had is that by pursuing too narrow a definition of our national interest we don't in the end benefit our own people, much less deal with these transnational problems" such as global warming, he said.

Under former President George W. Bush, the United States was the only industrialised nation to remain outside the U.N. Kyoto Protocol for curbing greenhouse gases. President Barack Obama has promised tougher action to cut U.S. emissions.

Steinberg said that Washington viewed the Northwest Passage, which opened past Canadian Arctic islands when Arctic summer ice shrank in 2007 to the lowest since satellite records began, as an international waterway.

Canada argues it has full sovereignty and that the route is in its territorial waters. "The United States has a traditional view that this is an international waterway and that's an approach that we will take," Steinberg said.

But he said that he hoped the standoff over the shortcut route between the Pacific and Atlantic could be solved. "I think it's a conversation we can have and work through," he said.

And he said the Arctic could be a test for a more cooperative relationship with Russia. "I hope so...They have a lot of interests there. We have to find cooperative strategies," he said.

Russia planted a flag beneath the North Pole in 2007 as a symbolic claim to the region -- Denmark also says that the pole is Danish.

Steinberg also said that Obama wanted the U.S. Senate to ratify the U.N. Convention on the Law of the Sea.

He said that more economic activity would mean more security worries in the north, such as a need for search and rescue after accidents. But he said security was not a dominant concern.

"I don't think we see it primarily through a security paradigm," he said, but added: "There's piracy off the coast of Somalia, so maybe we'd have to worry about it in the Arctic."

Email ThisBlogThis!Share to TwitterShare to FacebookShare to Pinterest
Labels: Bay of Fundy, Sovereignty

“It breaks my heart,” she said. “I really like the trains. I wish they’d come back.”

Doherty will be even sadder when the final train leaves the Down East area on Friday with its boxcars empty. The train has rumbled between the Canadian border and the Domtar facility in Baileyville two to three times a week, bringing pulp bleaching chemicals and other products to the mill and carrying pulp out. But after Friday the tracks will go silent.

The local train service that is owned by Pan Am Railways of Billerica, Mass., is one of the casualties of the temporary shutdown at the Montreal-based Domtar pulp mill. Earlier this month, mill officials announced they were idling the mill indefinitely beginning May 5.

The locals fear the shutdown might become permanent and the mill might not reopen. Company officials say that is not the plan.

Should the mill reopen, it is expected that rail service would resume. Pan AM Railways officials could not be reached for comment Wednesday.

On Wednesday the train, which Domtar spokesman Scott Beal confirmed was loaded with pulp, left the mill in Baileyville around 8 a.m. Engineer Doug Mclellan of Baring was at the controls and conductor Terry Diadone of Princeton was also onboard.

There were no banners or crowds of people lining the route as the fully loaded rail cars lumbered into Calais -- only Debby Doherty, who took time out from sorting bottles and cans to watch the train stop near her door.

During the glory days of rail service there were miles of track carrying cargo and people across the county and the country. Then it became just cargo. Now there is just a short rail connection between Baileyville and Calais.

When the train rounded the bend within sight of the rail bridge in the Milltown section of Calais and slowed, Diadone jumped off and threw the switch on a long metal pole. The tracks moved in the direction of the old railroad bridge that connects Calais with New Brunswick. In front of the bridge he opened the gate that is sup-posed to stop people from crossing the border illegally. A Canadian train waited just across the bridge.

Using a two-way radio, Diadone told Mclellan the tracks were ready and gave the engineer the go-ahead to push the freight across the bridge to the Canadian train, where they would “hitch into it and take it from there.”

Mclellan put the engine in reverse and the rail cars began to roll across the bridge to the waiting Canadian train for its trip to McAdam, New Brunswick. From McAdam, the boxcars would travel back west and re-enter the U.S. at Vanceboro, where Pan Am Railways reconnects them for journeys to mills in other parts of the country.

After the Canadian train pulled away with its American cargo, Mclellan jumped down from the engine and paused to reflect on the end of an era. The 61-year-old engineer said he has been with the rail company for 24 years. Speaking only for himself and not for the company, Mclellan recalled a time when trains and tracks dominated the area.

He blamed the loss of the now defunct Calais-Bangor Branch Line on inattentive politicians. “I think it is a tremendous blunder on the part of our local, state and county politicians,” he said. Mclellan didn’t care if the politicians were Republican or Democrat.

McLellan said he’d like to see the old Calais-Bangor Branch line run again. “Hopefully, some people will get together and maybe start this thing up again,” he said.

Pan Am Railways did not return a telephone call Wednesday.

Friday will be Mclellan’s final run as he takes the last train out of Baileyville. The boxcars again will hook into the Canadian line, along with the engine he will be operating. “I’ll come by train and leave by cab,” he said quietly.

Email ThisBlogThis!Share to TwitterShare to FacebookShare to Pinterest
Labels: Bay of Fundy, Events

Bay of Fundy - Harnessing the power of the sea 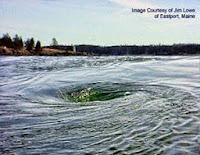 Get the pictures and subscribe at: http://fundytides.blogspot.com
Story by Sector Northern New England

Being stationed at the most northern Coast Guard station on the East Coast certainly has its share of challenges. For one thing, the water temperature this winter averaged 37 degrees and the rocky coast is unforgiving to careless or unlucky mariners. But perhaps the greatest challenge of all is dealing with the sheer force of the water brought in by the 22-foot tides and six knots of current that flow through the deep channels of the St Croix River.

The Old Sow, a geological feature off Eastport, is home to the largest tidal whirlpool in North America. Extreme tides and bathymetry help create a unique vortex that can create a 10-foot depression on the water's surface as millions of gallons of water flow quickly past Eastport. For the Coast Guard men and women in Eastport, the extreme challenges of nature bring only one response--if you can't change it, use it. So personnel at Sector Northern New England found themselves asking, why can't we harness the immense and predictable power of the tides to power the Coast Guard facilities here?

So it is fitting that on Earth Day, Sector Northern New England, in a partnership with the Coast Guard Research and Development Center in New London, Conn., announced a plan to test tidal generators off Station Eastport.

"With 22 Coast Guard units guarding an area spanning over 5,000 miles of coastline, Sector Northern New England strives to be good stewards of the environment and the taxpayer's money as we serve the public every day," said Capt. James McPherson, commander of Sector Northern New England. "As protectors of the environment, we feel a special responsibility to pursue renewable energy sources to help decrease our dependency on fossil fuels, seeking to keep the coast clean and beautiful."

Through federal funding, $100,000 has been made available for qualified industry experts to develop and test in-stream tidal equipment this summer. McPherson said the reaction from the local community has been extremely supportive and the Maine state and congressional delegation participated in the Earth Day press event at Coast Guard Station South Portland. Sector personnel wanted fast action so the proposals are intended to test actual generators in the extreme currents and tides. McPherson added that once completed, the station would be the first federal facility in the continental U.S. to use tidal power.

"Most people are aware of the Coast Guard's role in protecting the marine environment, but we also have responsibilities to the taxpayers too," said McPherson. "Nature provides other opportunities for New England units and solar and wind power are part of the plan."

Other projects Sector Northern New England has initiated include wind turbine installations at the South Portland and Southwest Harbor facilities that power computers, servers and monitors at a combined 365 kilowatt hours per month, and 360 lighted buoys and 60 light houses that are energized by solar panels.

"These efforts will continue to save taxpayer's money and protect the environment," McPherson said. "Every day is Earth Day for the Coast Guard."