Local and state biologists team up to bring eelgrass back to Island ponds. 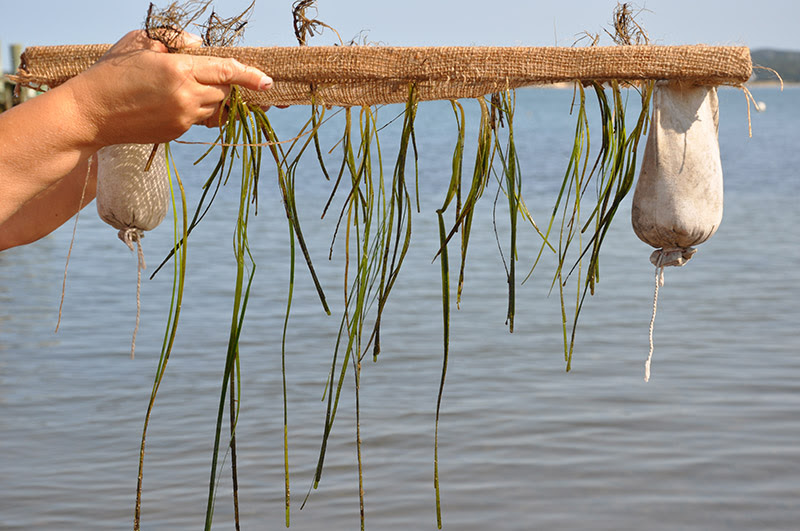 Eelgrass is shown growing through the burlap. 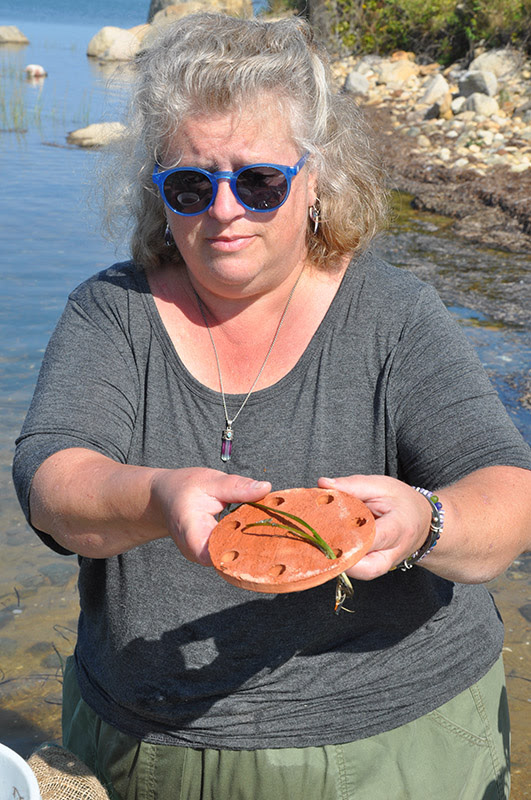 
Eelgrass plays a critical role in the estuarine ecosystem, which makes it particularly crucial to the overall health of the ecosystem on Martha’s Vineyard. Many species of fish and shellfish, including the prized bay scallop, depend on eelgrass to propagate the species. Eelgrass creates oxygen, which is essential for all forms of aquatic life, and eelgrass beds stabilize sediment and filter toxic metals and nutrient pollution.

Eelgrass is also an aquatic canary in a coal mine, and it’s been dying off in Island ponds at an alarming rate.

Aerial photos from 1996 and 2001 by the Massachusetts Geographic Information System (MassGIS) showed eelgrass declined over 17 percent in Menemsha Pond, which one of the healthier ponds on the Island. A 2013 Army Corps underwater study showed further decline in eelgrass density.

Down-Island, the situation is much worse. Oak Bluffs shellfish constable David Grunden describes
the state of eelgrass in Sengekontacket and Lagoon Pond as “dire.” He said there has been a massive die-off in the Lagoon that began three years ago, and Sengekontacket has lost about 99 percent of its once lush eelgrass beds since the 1980s.

Eelgrass is also difficult to grow, even in a controlled environment.

Looking to find a way to re-establish the meadows of eelgrass that once flourished in Vineyard waters, staff from the Natural Resources Department of the Wampanoag Tribe of Aquinnah, the Environmental Protection Agency, and a cadre of volunteers spent last Wednesday planting eelgrass shoots in Menemsha Pond, using new technology.

Bret Stearns, director of the Wampanoag Tribe of Gay Head (Aquinnah) Natural Resources Department, and Beckie Finn, environmental programs coordinator, spoke to The Times last week about the evolution of the project.

“The eelgrass project is part of a larger project that’s funded by a National Fish and Wildlife Foundation grant, which we applied for at the end of 2013,” Mr. Stearns said. The grant is also funding the beach nourishment and beachgrass planting on Lobsterville Beach, and the monitoring and dredging work at Herring Creek.

“We take our time doing our research and developing a standard operating procedure,” he said. “Through her research, Beckie found a different methodology that hasn’t been used here before.”

Ms. Finn said she was seeking an alternative to the current methodology of weighted metal grids with eelgrass shoots attached.

“I was looking for a biodegradable way to do that, and found Dr. Jane Disney, at MDI Biological Laboratories in Bar Harbor, Maine,” she said. “She very generously sent us several papers she and her colleagues had written about it.”

The biodegradable grids outlined in the MDI studies consist of a 2-foot by 2-foot fir pine frame, with burlap or twine strung across it. Eelgrass is tied onto the twine or woven through burlap. Each grid holds about 20 shoots of eelgrass. Frames are placed one foot apart and are held down by biodegradable sandbags. The eelgrass shoots will hopefully take root, and over time, the twine, burlap, and the frame will degrade away.

About half of the 50 frames came from MDI, and Gordon Perry, carpenter and tribe member, built the rest.

Another biodegradable method involved planting 20 clay disks, about 10 inches in diameter, with seven holes for eelgrass shoots, tied on with twine. The terracotta disks are anchored in a one-foot grid, where the shoots will hopefully root and spread. After about six weeks, the disks dissolve away, leaving only the rooted eelgrass.

“We had a water team and a land team working together,” Mr. Stearns said.

“We were on the beach tying shoots to the frames, while the water team was harvesting,” Ms. Finn said


“We had a goal of doing 1,000 shoots in the day, but since we did the clump method, we were able to plant more than 5,000 individual shoots,” Mr. Stearns said.

Ms. Finn said there were positive signs almost immediately after planting the shoots: “You could see all the little guys swimming under the frames and around the frames.”

“We kicked out some juvenile winter flounder when we were laying down the frames,” Mr. Stearns said. “We were happy to see them after that big restoration project we did.”

The ideal scenario would be if roots from separate frames manage to hook up. “In a year, we’ll have to brush out the soil and see if the roots have connected to each other, which is what you want with eelgrass — the roots meet each other and the root system becomes massive underneath,” Mr. Stearns said. “That’s how it holds the bottom in such dynamic environments.”

Mr. Stearns said there was a previous effort to restore eelgrass in Menemsha Pond several years ago, planting one stem at a time. “It was time-consuming, and it didn’t work,” he said. “Looking at this method, it makes sense why it didn’t work. There wasn’t enough stem to hold it. One good storm and it’s gone. We’ll check the plantings after Jose, but I feel confident they’ll do fine.”

The success of the Menemsha Pond eelgrass project can be a game-changer for the Vineyard’s ecosystem.

“Ultimately, when we see what works, we want to share the methodology,” Mr. Stearns said. “If it works, I think there are ways to tweak it to create larger restoration areas that could be done inexpensively. It’s pretty exciting to think that if this works out, we can talk about acreage of rehabilitation.”

From: Eelgrass experiment takes root in Aquinnah - The Martha's Vineyard Times
on October 21, 2017