COREXIT: Is the cure worse than the disease? You be the Judge.

Bill C-22 is 'an absolute, total abdication of regulatory responsibility' 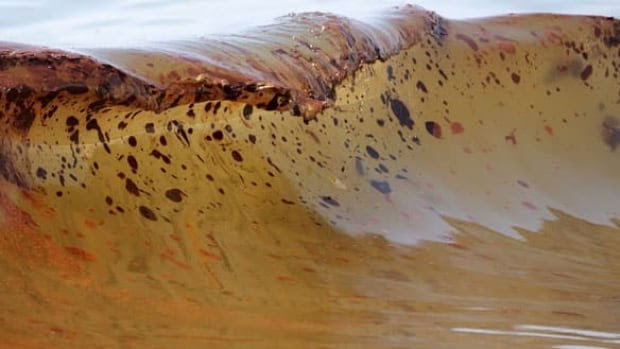 
A Shelburne County environmentalist is raising concerns about a toxic chemical that could be used off Nova Scotia in the future.

When the Deepwater Horizon oil platform erupted in flames in 2010, it spewed oil into the Gulf of Mexico, but some research says the cleanup was worse because about 6.8 million litres of the chemical Corexit 9500A was used to disperse the oil.

The dispersant used by oil company BP, when mixed with crude oil, was found to be 52 times more toxic than oil alone to some microscopic plankton-like organisms called rotifers.

He says Shell has already put out bids to use Corexit if there is a spill at a well planned for the Shelburne Gully.

"The creators of CoRexit will tell you it's less toxic than dish soap. All you have to do is read the warning label to know that it’s a highly, highly dangerous chemical.… There is no doubt in my mind that if Shell made the effort they could find ways to clean up the oil and not just be prepared to disperse it and put it under water and out of sight," he says.
'Total abdication of regulatory responsibility'

Davis says there is legislation in place to prevent the use of chemicals like Corexit, “but what happened here is that the federal government has decided to put forward legislation called Bill C-22 — which in fact creates a circumstance where the oil company can go and utilize the product, the dispersants, and then report after the fact to the regulatory agencies. It is an absolute, total abdication of regulatory responsibility.”

Bill C-22 was introduced by the federal minister of Natural Resources earlier this year.

It would pre-approve emergency plans for oil and gas companies to deal with spills, such as the speedy use of dispersants, or chemicals used to break oil into smaller particles in the event of an oil spill at sea.

Davis says he worries the chemical could end up on the Georges Bank, pointing out the Labrador Current would carry any material right to the fertile fishing grounds.

"It’s that [upwelling of water] that provides much of the nutrients that makes Georges Bank such an important biological place — and so important to us as an economical generator," he says.

Dispersants cause giant pools of spilled oil floating atop the sea to break up into tiny droplets that then dilute with water just below the surface. The process helps creatures including turtles, birds and mammals that need access to the surface, and also ensures less oil flows ashore where it can choke coastal wildlife. However, it increases the amount of oil just below the surface, potentially contaminating the organisms that live there.

Scientists at the Autonomous University of Aguascalientes in Mexico and the Georgia Institute of Technology now say Corexit 9500A is far more harmful than previously thought to a key dweller of those sub-surface depths.

An Environment Canada study states the dispersant is 27 times safer than common dish soap, but some say that figure is dangerously misleading. The study also states that five of Corexit's 57 ingredients are linked to cancer and can pose "high and immediate human health hazards."

In all, the British Petroleum oil leak was the largest offshore petroleum spill in U.S. history, sending 4.9 million barrels (584 million litres) of crude into the Gulf of Mexico.
on December 29, 2014 No comments: Links to this post

NOTE:  In addition to the presentation at Municipal Council next month, below, John Davis will be on CBC on Monday: “Information Morning” interview between 7 and 7:30 on Monday morning, December 29th.


This is one of the most thorough and correct assessments of the management, control and impacts that can be expected from current oil explorations off Nova Scotia. The assessment applies almost equally, but with wide variation in dispersion, to the Gulf of St. Lawrence. It is a must read for residents of these shores in Nova Scotia, PEI, New Brunswick, Newfoundland and Labrador and Quebec.
Art MacKay
*******************************
Published on December 16, 2014
The Shelburne County Coast Guard

By John Davis
Shell Oil is moving steadily through the regulatory process which will allow the drilling of exploratory wells on the edge of the Scotian Shelf in an area known as the Shelburne Gully. It looks very much as if this process on the Scotian Shelf will become a major offshore oil play for many years to come. Shell’s plans are to drill up to 7 exploration wells over a 4 year period (2015-2019). This represents a $1 Billion investment. British Petroleum holds a lease to the North East of the Shell holdings. They are planning a similar project.
Randy Hiscock, Manager of Business Development and New Ventures at Shell, stated recently”
“the earliest drilling could take place in the Shelburne Basin in late 2015, and that depends on the results of the seismic research, rig scheduling and getting the proper equipment in place.”
Mr. Hiscock went on to say, “Oil is what Shell is banking on. “The sun is rising hopefully on a new day in offshore Nova Scotia.” “We look forward to getting some wells out, having some exploration success and being here for at least another 70, 80 or 90 years.”
This is very good news for the Nova Scotian economy but it is a clear indication that there is work to be done on the South Shore to see that good working relationships are created and maintained between our coastal communities, our fishing industry and, what is for us, a new offshore industry. Paramount in this process is for Shell to demonstrate a respect for the environmental integrity of the South Shore and a respect for our primary economic engine, our fishing industry.
As an example of the type of issues we face, and this is one of many, let’s look for a moment at potential fishing ground impacts and spill response plans starting with section 8.0.0 of the environmental assessment produced by the consulting firm, Stantec.
Shell states in the plan:
“Shell is committed to responding to an offshore oil spill with a full complement of response tools and strategies including surface, aerial and subsea dispersants; mechanical recovery; in situ burning; shoreline protection and recovery and well control.”
Shell could very well be committed to this list of response tools and strategies but it is essential that South Shore communities to take a close look at the realities surrounding their actual ability to contain and secure spilled oil. Mechanical recovery as it exists at
Read more »
on December 28, 2014 No comments: Links to this post

The Latest Update to the Save Passamaquoddy Bay website: