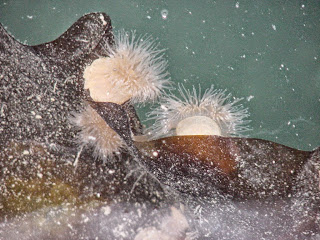 One of the fundamental concepts of marine ecology and modern fisheries management is that fish and other ocean wildlife need various types of habitat to feed, grow, and reproduce. Healthy ocean habitat is crucial to the well-being of ocean ecosystems and also provides spawning grounds for commercially important groundfish. New England’s ocean waters are home to several special places that deserve permanent protection.

Cashes Ledge, an underwater mountain range 80 miles off the coast of Maine, supports the largest and deepest kelp forest off the Northeastern United States and is home to an enormous diversity of ocean wildlife – from whales, Atlantic wolffish, and blue sharks, to fields of anemones and sponges. This kelp forest provides an important source of food and habitat for a vast array of ocean wildlife. Other places such as Jeffreys Ledge and Stellwagen Bank National Marine Sanctuary provide rich habitat for highly depleted cod and haddock, sea turtles, and four species of whales.
Most of these three areas in the Gulf of Maine currently benefit from fishing regulations which prohibit harmful bottom trawling, but these protections are temporary. Some of the largest commercial fishing trawlers in the region are pushing for changes in regulations to allow bottom trawling in Cashes Ledge, Jeffreys Ledge and the only protected portion of Stellwagen Bank National Marine Sanctuary.

After the last cod crisis in the 1990s the New England Fishery Management Council (NEFMC), after a court decree spurred by a CLF legal action, designated Cashes Ledge and an area known as the “Western Gulf of Maine” which holds Jeffreys Ledge and 22% of Stellwagen Bank National Marine Sanctuary, as “mortality closures.” The action restricted destructive trawling, but it allowed a wide array of other commercial fishing gear such as bottom gillnets, purse seines, hook and line and more the questionable practice of “mid-water trawls,” which despite their name, often catch groundfish. Recreational fishing and charter boats were not restricted.

This single protective measure restricting commercial bottom trawling helped to restore seriously depleted populations in these areas. Moreover, protecting areas like Cashes Ledge created the “spillover effect” where larger populations of fish migrate out of the boundaries of the protected area. This is why commercial fishing vessels often “fish the borders” of protected areas.
After a new stock assessment released one year ago showed that populations of cod, haddock and other groundfish were at all time lows, the National Marine Fisheries Service (NMFS) under pressure from some of the largest trawlers in the New England fleet started to hint that allowing bottom trawling in previously protected habitat areas – places like Cashes Ledge – might help to increase falling harvest amounts. At a time of the lowest recorded groundfish populations in history, how does it make sense to increase trawling in the best, remaining habitat areas?

This is why we must urge NOAA to keep our habitat protections in place.
Cashes Ledge is important not only to fish and ocean wildlife but also to scientists hoping to learn about the health and function of New England’s oceans. Many scientists believe that Cashes Ledge represents the best remaining example of an undisturbed Gulf of Maine ecosystem and have used Cashes Ledge as an underwater laboratory to which they have compared more degraded habitat in the Gulf of Maine.

The basic fact is that opening scarce protected habitat in the Gulf of Maine to bottom trawling at a time of historically low groundfish populations is among the worst ideas for recovering fish populations and the industry which depend upon them. But fisheries politics in New England remain.

On Dec. 20th the NEFMC may take action through a backdoor exemption process to allow bottom trawling in a large portion of Cashes Ledge and other areas. NOAA needs to keep current protections in place. CLF is committed to securing permanent protection to ensure the long-term health of this important and vulnerable ecosystem. Click here to urge NOAA to protect New England ocean habitat and help ensure a healthy future for New England’s ocean.