Number of flooded N.B. roads down to 70 from 120 earlier this week 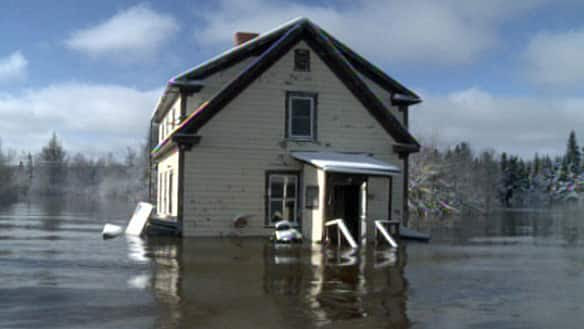 All roads and bridges leading into the southwestern community of Bonny River, which is near St. Stephen, were either washed out or underwater.
The Canadian Red Cross set up shelter at the Bonny River Fire Department to help residents who lost their homes in the flood.
The main commute to and from Bonny River in recent days has been by boat, such as those operated by Cooke Aquaculture, which has been helping by ferrying people and supplies.
Many roads were fully hidden by water except for the tops of stop signs, while the local landscape was filled with broken porches and waterlogged houses.


'I love my spot on the river but as I've always said, to have the best spot,
there are prices to pay, but I think this price is too high.'— Angela Steen, Bonny River resident

Nicole Norman, who lives in nearby Second Falls, said she finally got a chance to assess the damage to her home on Thursday, and saw the inside was a disaster.
"I saved some of my daughter's Christmas gifts, that's about it. Everything else is ruined," Norman said.
Angela Steen, another Bonny River resident, said she fared a little better.
Her basement is completely flooded but she managed to save some items.
Steen said after what happened during the flood, she can't imagine living in her home much longer.
"I love my spot on the river but as I've always said, to have the best spot, there are prices to pay, but I think this price is too high," said Steen.
Steen said she is relieved the water has finally crested, but she said it will be a long time before things are fully back to normal in her community.

Alward toured the area Wednesday after announcing the government would extend various forms of relief to people affected by the rising waters.
The plan outlined by Alward includes complimentary reconnection of electrical services and free water testing. 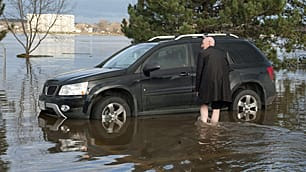 G
ary MacDonald wades through a flooded parking lot to get to his vehicle near the St. John River on Tuesday in Fredericton.(David Smith/Canadian Press)
The premier said the government will also help with health and safety inspections and that citizens can register for funding through the disaster financial assistance program by contacting Service New Brunswick.
Alward said the government is offering residents $4,000, which will help people start taking care of their immediate needs.
Federal cabinet minister Keith Ashfield said the government is willing to help the provincial government fund efforts to rebuild after the flood.
Alward and Transportation Minister Claude Williams have estimated that millions of dollars worth of repairs need to be done to infrastructure across the province because of the floods.
A complicating factor is some road work will have to wait until the spring because the full repairs cannot be completed during the cold and snow of winter.
Read more: http://www.cbc.ca/canada/new-brunswick/story/2010/12/17/nb-flood-waters-receding-in-southwestern-nb.html?ref=rss#ixzz18TcD2neQ
on December 18, 2010

Email ThisBlogThis!Share to TwitterShare to FacebookShare to Pinterest
Labels: Weather