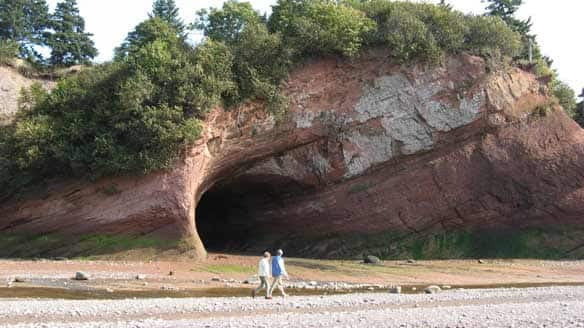 UNESCO named Stonehammer Geopark, which includes Fundy National Park, the world's newest geopark at a conference in Greece. (CBC)UNESCO has named a large swath of land along the Bay of Fundy coastline as the world's latest geopark.

The title comes just after construction workers at a nursing home project in Saint John found a 500-million-year-old rock formation called a hinge.

And scientists discovered 318-million-year-old reptile footprints in rock slabs near St. Martins in 2008.
'From a marketing perspective, as well as educational and preservation perspective, it just gives us that extra notch, that extra level we're able to work with now.'— Gail Bremner, Stonehammer Geopark

Gail Bremner, the executive director of Stonehammer Geopark, said the designation and the prestige it carries will help attract more tourists and bring some of them back.

"It provides new product. For example, for the cruise ship visitors that are coming, we get a lot of repeat visitors, so it gives them an opportunity to explore our region in a different perspective," Bremner said.

Geologists from Germany and Ireland visited southern New Brunswick in August to assess whether the area should be home to the continent's first geopark.

This is just another distinction for the region.

The Bay of Fundy is one of 28 finalists in a worldwide campaign by the New 7 Wonders Foundation, a group based in Switzerland. The online campaign is intended to increase knowledge and tourism to some of the world's great natural wonders.

Other entrants include the Amazon rainforest, South Africa's Table Mountain, Uluru in Australia (also known as Ayers Rock) and Mount Vesuvius in Italy. A rock formation, estimated to be 500 million years old, was found in Saint John last week. The area has been named a geopark by UNESCO. (CBC)There are now 77 geoparks in 24 countries around the world.

The UN describes a geopark as a scenic area of special geoscientific significance, rare natural attributes and aesthetically ornamental value.

Geoparks are popular sites for sightseeing and cultural recreation, but also key protected areas of geological heritage and bases for geoscientific research and popularization.

The new distinction is expected to become a boon for tourism in southern New Brunswick.

"We now have a network of other geoparks to work with. We have that brand and designation to work with," Bremner said.

Other long-standing tourist attractions in the region are also expected to see an uptick in visitors thanks to the new recognition.

Ross Jefferson, the executive director of Saint John Destinations Marketing, said some of the attractions within the geopark, such as the Saint John River's Reversing Falls, also stand to benefit.

"It just makes these sites and locations obviously a place that I think our municipalities, our province, our federal government and the private sector would be interested in investing in."

Read more: http://www.cbc.ca/canada/new-brunswick/story/2010/10/05/nb-unesco-geopark-stonehammer-527.html?ref=rss#ixzz11az09189
Get the pictures and subscribe at: http://fundytides.blogspot.com
Search Amazon.com for Bay of Fundy Geology