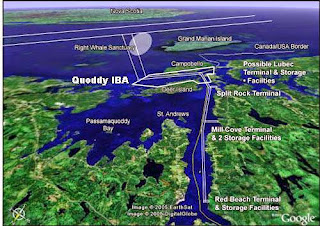 Get the pictures and subscribe at: http://fundytides.blogspot.com
4/28/10 | 17 comments
By Bill Trotter
BDN Staff

PLEASANT POINT, Maine — An energy development firm has lost its land lease with a local Indian tribe after the federal Bureau of Indian Affairs canceled the firm’s lease contract, according to officials.

The Vermont Law School’s Environmental and Natural Resources Law Clinic issued a press release Monday afternoon indicating that BIA canceled Quoddy Bay LNG’s contract with the Passamaquoddy Tribe on Friday. The law clinic represents a group of tribal members that is opposed to the firm’s plans to construct a liquefied natural gas terminal on tribal land on Passamaquoddy Bay.

Don Smith, president of Quoddy Bay LNG, said in a telephone interview Tuesday evening that he has received a letter from BIA indicating the agency has canceled his company’s lease with the tribe. He said the reason stated in the letter for the cancellation was that Quoddy Bay had not responded in a timely fashion to a request from BIA for an explanation of why the contract should not be terminated.

“I had thought we had responded to the BIA,” Smith said.

Smith said he plans to contact BIA and ask it to reconsider.

An official with BIA who asked not to be identified confirmed Tuesday that the agency notified Quoddy Bay of the contract cancellation Friday. The official said Quoddy Bay can appeal the decision, but declined to comment further.

Smith reiterated that point on Tuesday. He said he believes the tribe is legally obligated to honor the contract and that, over the long term, the project is still economically viable.

He said there will continue to be demand in southern New England for natural gas, and that piping it south from Washington County will be more cost-effective than delivering it by other means.

“The financial circumstances of the country have made it impractical to build it now,” Smith said.

He said his firm has spent $17 million on the project so far. When the economy improves, he added, he intends to find a financial partner to help bring the project to fruition.

Smith said that, both for Quoddy Bay and the tribe, it makes more sense financially to leave the project on pause than it does to throw everything out and start all over again at a later date.

Some members of the tribe have been against the project from the beginning. In 2005, months after the contract was approved by BIA, a group of Passamaquoddys who call themselves Nulankeyutmonen Nkitahkomikon unsuccessfully challenged BIA’s approval in federal court. The name of the group translates into “We Take Care of Our Land.”

“[This] victory is on behalf of our descendants because it is what our ancestors expect from us,” Vera Francis, an organizer with the tribal group, said in a prepared release about BIA’s cancellation of the contract. “To value and defend that which has sustained us — Passamaquoddy Bay — is what defines and shapes our future.”

Teresa Clemmer, assistant director of the Vermont law clinic, said in the same release that the tribal group and clinic staffers persevered for five years to have the lease thrown out.

“It’s a great result and a testament to their determination and willingness to hang in there for the long haul,” Clemmer said in the statement.

Quoddy Bay LNG withdrew its applications for state and federal permits in 2008. The projected cost of constructing the facility, which would be used to offload LNG from specially designed tanker ships and to pump the vaporized cargo to the Maritimes & Northeast Pipeline in Baileyville, is believed to be in the range of $500 million.

Three developers have expressed interest in or developed plans for an LNG terminal in eastern Washington County. In addition to Quoddy Bay LNG’s plans, Downeast LNG with an office in Robbinston has received a draft environmental impact study from federal regulators on a plan for a terminal at Mill Cove, and Calais LNG hopes to build a terminal on the St. Croix River in Calais.
on May 06, 2010